We’ve been wanting to play in London for ages. It almost happened a year ago when we joined Pete Green for a couple of dates on his album tour, but the London gig was on a Sunday night which we couldn’t make work.

So when MJ Hibbett asked us if we wanted to be one of the bands at his monthly night we jumped at the chance. Totally Acoustic in London was being revived and he wanted us to play? Amazing! We asked if there was space on the August event, which there was. This would fit in brilliantly with Val who is a teacher and her summer holidays.

With the gig sorted, our attentions turned to getting some practice in before the big day. It was then we realised the downside of an August gig: all of us were on holiday one after the other at different times for two weeks in the run up! Not ideal, but nothing that couldn’t be sorted with a bit of solo practice – we hoped.

The day came and after a morning at work I walked to Sheffield train station and boarded the train. With a very comfortable six minutes to spare, Val arrived laden with bags including instruments, the bulky glock stand and a jacket for the London weather.

We have different approaches to last-minute practicing. I find it makes me more nervous to be going over our songs so close to a show, whereas Val finds the best way to swot up. So she found a spare seat in the carriage and ran through the words and (muted) glock parts. By the time we reached London late afternoon she was fully up to speed.

We decided to walk from St Pancras to the venue instead of getting with the tube. It also meant we could stop off on the way to get some food.

At around 6pm we arrived at The King and Queen, which I immediately warmed to. It had the feel of a proper old London pub: nicely shabby, independently run (I think?) and a decent selection of ale. In fact, its vintage feel was so genuine that I don’t reckon the carpets upstairs had been refreshed since Bob Dylan made his 1962 London debut there. There was even a photo on the wall to celebrate this! (Bob’s first London gig, not the old carpets.)

Our friend Alex Hale from Nottingham was already at the pub and was just putting the finishing touches to his Shakira cover. Nik and her brother arrived (they’d driven up from Brighton) so we set up and got some drinks. Shortly after, our host Mark and Skint & Demoralised Matt Abbott also arrived.

The upstairs room at the King and Queen is L-shaped and relatively big. Encouragingly, there were plenty of people there in time for the start of the evening. Before welcoming Matt to the front, Mark introduced things and got the crowd warmed up with a hearty rendition of the Totally Acoustic theme song, which you can hear this at the start of the podcast.

Matt got things underway with an entertaining half hour set of punk poetry. We’ve seen him perform before playing music and also doing poetry and thoroughly recommend you check him out – even if you’re not a poetry fan.

Alex was up next, starting with The Failed Soviet State of My Heart, a great song which I think is going to be on his debut solo release.  As well as some audience participation, he bravely played a song that he’d written that very day and also welcomed supporting musicians and singers to assist on a couple of numbers including the Hips Don’t Lie finale.

After a break Mark did a short set of new songs and one old one. We last saw him play at Indietracks festival to hundreds of people in a packed railway shed. Once again he had everyone eating out of his hands. The new songs sounded ace – Get over it is destined to be another Hibbett classic – and of course he was very funny. This was helped ease the pre-gig nerves but also made us think that we needed to up the entertainment value in order to keep the good times flowing!

Following a kind introduction from Mark, it was our turn. All in all we played OK I think despite a couple of mistakes and Stylophone tuning issues (Nik’s nephew had been test-driving it earlier on that day!) Our set was:

*you can hear these songs on the Totally Acoustic podcast

I’d been waiting to play Seven hills in London, our song about leaving Sheffield for the capital and then moving back home again. As usual I was choking up even before Val had played the first glock notes of the intro! 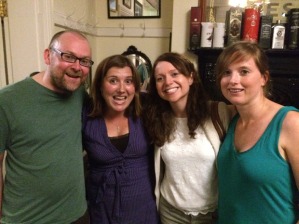 It a very friendly crowd including plenty of old London friends who had come out in support but also lots of people we didn’t know, which was lovely to see.

Afterwards we hung round chatting, had a couple more drinks and sold some records (hurrah!) The evening then came to an end with us each making our way back to stay with friends for the night.

We all headed back to Sheffield first thing on Wednesday morning, with both Nik and I due back in at work for the afternoon.

All in all it was a brilliant evening – thanks again to MJ Hibbett for putting us on . Hopefully we won’t be waiting another four years for the next London show!